What activities and organizations are you involved in? 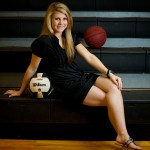 What honors and awards have you received?

AM: I was senior homecoming queen, Senior Who’s Who Most Athletic. I was awarded Isabella Invitational MVP, and I was awarded the Chilton County Volleyball Player of the Year.

What are your plans after graduation?

AM: I plan to attend Montevallo and go in for vet tech.

Do you have a favorite memory, or several, from high school?

AM: I guess you could say something about me and Coach Graham not getting along until I started playing volleyball. We always strongly disliked each other. I was mean whenever I was in sixth grade. I had him as a P.E. coach my fifth, sixth and seventh grade year.

Has he been one of your mentors?

Has anyone else influenced you?

AM: Coach Day. We get along pretty well.

What advice would you give to younger students?

AM: To go through with what you plan to do, and don’t let anybody get in the way of it.