What activities and organizations have you been involved with?

Destinee Tyus: I’ve been in band, beginner band, high school band, marching and concert. I’ve been in Beta Club ever since I got a chance to be in there, FCCLA, softball, even cheered a couple of years. Just a lot of little other volunteer things they’d have – trade days and going Christmas caroling with the Beta Club. 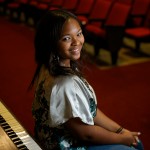 Tyus also earned the fourth highest GPA in her class, was the girls basketball team manager and received a band and academic scholarship to Huntingdon College.

What honors have you received?

DT: A Honor Roll. I got drum major, two years. Secretary of FCCLA. I got class treasurer this year.

What are your plans after graduation?

DT: I’m going to go and pursue a degree in music and nursing.

What schools are you looking at?

DT: Huntingdon College in Montgomery, and (University of) Alabama and AUM. My main goal is just to be the best that I can and try to help out. Don’t settle for less. Try to change the world, even if it’s just a little bit.

What is your favorite memory from high school?

DT: I have two. I have band camp last year and I have the year I went to cheer camp with Mattie because of her bee incident, which was hilarious. It always cracks me up, and I remind her every year.

Who are your mentors?

DT: My grandparents, and my church and some of the teachers here at Verbena.

What advice would you give to younger students?

DT: Don’t worry about what other people think. Just do what you know how to do and try to do the best that you can, no matter what it is. Even the small things, do your best.