The line of friends and family grows longer every year stepping into Becky Payne’s house transformed into a Christmas wonderland.

Each year since 2005 every room on the first floor of her home is transformed into a Christmas display. Santas, trees and Nativity scenes can be spotted in some unusual places, including the bathroom.

Her party always seems to have room for one more and having enough food is never a problem since every one brings something.

Admiring her Christmas tree, guests see some of her ornament collection with very few being the same.

She said the magic of the season and always having something new to see are the main reasons for her love of the holiday.

She used to put up two trees but, in recent year, has gone back to just one.

While white lights are used in some of her decorations, Payne said her main Christmas tree always has to have colored lights.

“The Christmas tree has got to have colored lights and twinkle, they have to dance and twinkle,” Payne said.

Special ornaments can be seen on ornament display trees throughout the house.

Some of her favorites are her White House Christmas ornaments. Payne’s friend Julie Overby gave Payne her first ornaments in the collection.

“We had been friends since second grade,” Payne said. “She passed away with cancer in 2009, so those always go on a metal tree to the side, where you can just see (them).”

Her Lennox ornaments are displayed in a similar way.

“When I sit down with Christmas ornaments and I unwrap that ball, I remember where I got it who gave it to me,” Payne said. “It’s just memories.”

Her festive party started with 15 people and has grown to more than 40.

Payne said all of her friends, and some of their friends, are always invited.

There have been up to four generations of a family at a time at the party.

Her flair for decorating had begun earlier than her annual party.

“I would decorate and everybody says, ‘well, nobody sees it, why don’t you invite us over?’” Payne said.

Since the party is always the second Tuesday in December, her decorations have to be in place early.

“I try to wait until Thanksgiving afternoon, but it is getting harder and harder the more I put out,” Payne said.

Her family and friends do not just show up for the party, many come to help her deck the halls and come back after the party to help her carefully put away the treasures until next year. 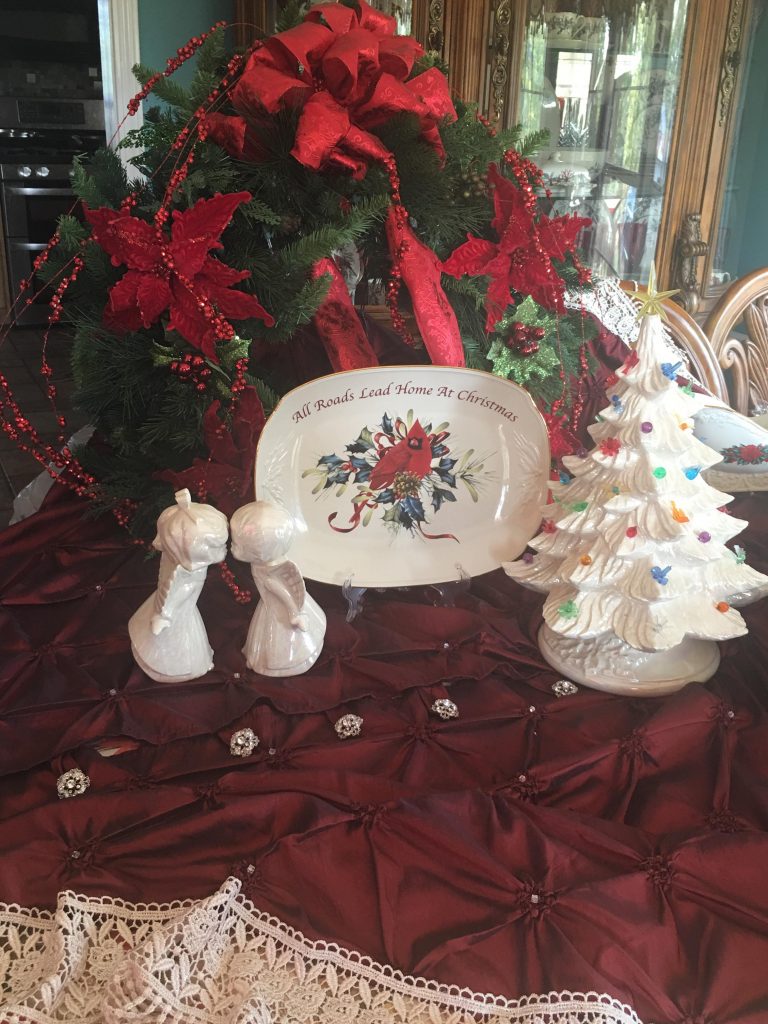 “I have 35 years worth of Christmas stuff, and I just change up where I put it, put something new with something old,” Payne said.

Her collection has grown as some guests to the annual party will often bring an ornament as a thank you.

Payne’s color scheme stays with the traditional red, green and golds with some unique ornaments, including a hamburger and jellyfish, that have been gifts from her daughter.

“I love some of those new colors, but I just have so much that I can’t change,” Payne said.

The dining room display is usually home to the Santa and reindeer cookie jars. Payne said she had wanted the Fitz and Floyd pieces for a while but waited for a sale to get them. Since that first purchase, she has expanded trying to get Santa his traditional eight reindeer.

The party has an added special air as guests use china and crystal glasses.

Garland is used in a variety of ways each year.

“I love the garlands … of course they are lit, and I add crystal swags and ornaments,” Payne said.

One year, she put garland around the window and placed her Lennox teacups in it.

“I collect Mark Roberts elves,” Payne said. “Everybody says they are creepy, but if you really look at them, you’ve got to like them. They are a good conversation starter.”

Payne often finds creative ways to display decorations she has had for years.

“Last year, I had them (Mark Roberts elves) hanging from the chandelier like he is trying to get into the dip, hanging out in the kitchen with his chef’s hat,” Payne said.

Changing up where she puts the elves creates a hide-and-seek game of sorts as guests to her home discover ones they may not have seen before.

Disney-themed decorations are also a prominent display. Payne said she has a gazebo display that features a dancing Cinderella and Prince Charming.

“That’s the whole point of Christmas to see the wonder on the little children’s faces when they walk in the door and their eyes light up and they run to the tree,” Payne said.

Adults and children alike can enjoy the wonder of the season in December at the Payne house.