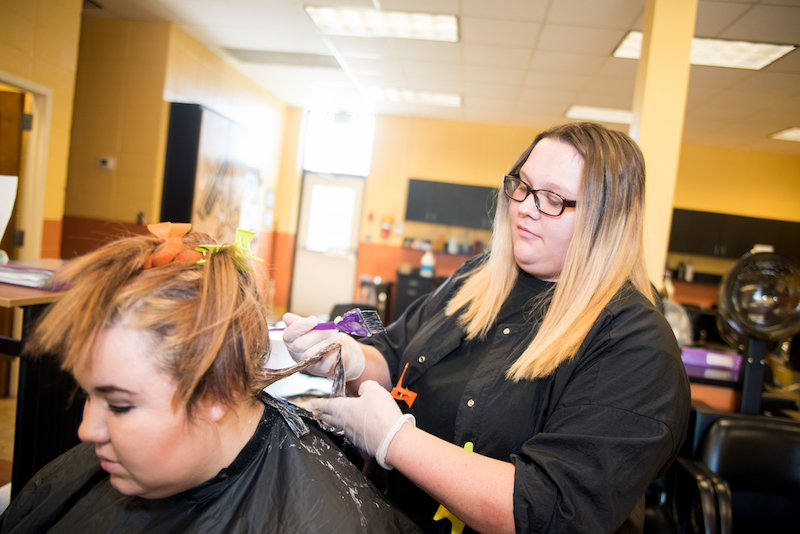 With every new season, comes new styles and preferences. These often include a new hair style, color or cut.

At LeCroy Career Technical Center, high school juniors and seniors from throughout the county learn a variety of hair and nail styles in a two-year program.

The various styles and techniques are practiced on mannequins before the students move on to helping customers and doing each other’s hair and nails.

Through the school’s simulated workforce design, students learn all aspects of working in a salon. Students are divided into two salons per class, each with a student manager and assistant manager. This year the salons for the afternoon class are Beauty from Ashes with Madison Easterling as manager and Tangles with Kailey Cordes as manager.

“They start out with sanitation, sterilization and they go all the way up to the cosmetology board requirements, such as getting ready for state testing,” Instructor Tracey Minor said.

Coloring hair is the favorite part for many of the students. Having three colors, especially reds, blondes and browns, was popular in the fall.

The students would also like purple and pink, if they could have them and still be in line with school dress code, Minor said.

However, adding a section of fake pink hair for breast cancer awareness month in October is popular.

“I love color that’s the best part of it,’’ Taylor Connell said.

Her favorite style to do is the ombre. In this style, the top portion of hair is one color and transitions to a different color on the bottom portion.

Connell had this hairstyle during the interview.

“It’s just different,” Connell said. “You don’t see many people with it … Its creative.”

Blonde is a popular color for the bottom color in this hairstyle. But, Connell said she would like to try some wilder combinations with her own hair.

Connell, who is in her second year in the program, said she wanted to be in cosmetology, because of her aunt.

Connell’s recipe for success in the program is “getting creative with it and know you can do it.”

“It’s a great program,” Connell said. “It really is. You learn so much from it.”

Prior to being accepted to the program, Christina Carter had taught herself the foil technique of coloring hair and would do her mom’s hair.

Just what technique the hairstylist-in-training uses when coloring depends on what the customer wants.

“I would rather foil than put a cap on because it gets down to the roots and it’s not gapy,” Carter said.

However, she commented that some people prefer the gaps.

“Ever since I was a kid, I wanted to do hair,” Carter, who is in her first year in the program, said.

She said she has learned that it is worth paying more to use salon-quality products.

Red, blonde and caramel highlights were the customer’s choice one day this semester. 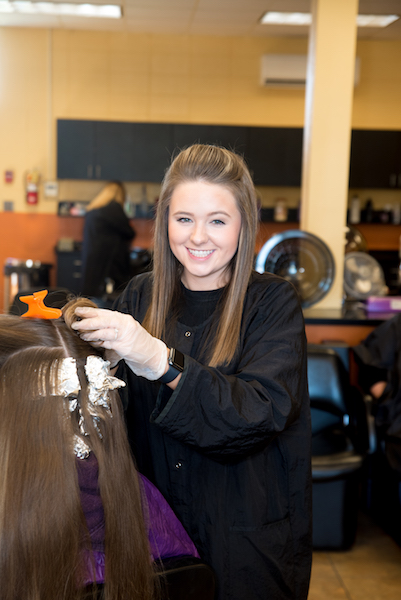 Students divided the customer’s hair into sections for each color before beginning the coloring process using the foil technique.

“I like doing haircuts more than I do color because I have had more practice with it,” Easterling said. “I do a lot of men’s haircuts.”

A popular haircut this semester for men has been the fade — where the side is super short and the hair is longer on the top.

Confidence is also crucial to a good haircut, Easterling said.

“If you are nervous about it, you are more likely to mess up,” Easterling said.

Easterling, who is in her second year in the program, said “making people feel pretty all the time” is why she wanted to be in cosmetology.

Perms have also made a comeback in popularity.

One version of this style students learn is “the helicopter perm” because of how the curlers and placeholders look during the process. Estrella Gutierrez, who is in her first year in the program, said the style keeps the person’s hair straight toward the top of the head and the rest curly.

Williams said she became interested in joining the program after she started “doing hair on the weekends.”

Gutierrez has enjoyed “learning the new techniques of … perms, learning how to do manicures and stuff like that.”

The program does have some loyal customers that help the students experience what working in a salon is really like. Minor said one woman has been coming since she was in the program.

“She still comes and gets perms twice a year,” Minor said.

Students will accrue up to 840 hours during the program.

The additional required hours for licensure must be completed at the college/ cosmetology school level before being qualified to take the state licensure exam.

“I would like to own my own salon,” Easterling said. “I am going to Jeff State after I finish cosmetology school to get my business degree.”

Many of the students share Easterlings desire to own their own salon one day.

As a part of LeCroy’s program students have the opportunity to tour several colleges.

“They enjoy that,” Minor said. “There are people there from all over the world doing anything from hair coloring to haircuts, you name it.”

Community service is also important to the LeCroy students. Minor said the students go to assisted living facilities to do female residents hair, makeup and nails.

“They love to do stuff like that,” Minor said.

The residents then had a fashion show that the students judged.

Customer service is a major component of the program. Minor said this includes greeting customers at the door, introducing themselves, asking the customer what they would like and taking them to the chair to start.