Story and photos by JOYANNA LOVE

Moving to a place where they could have some land and have a farm had long been a dream for Jaime and her husband Stan Elliott.

“Neither one of us was raised on a farm, our grandparents had farms, but our parents didn’t,” Jaime Elliott said. “We have three boys, and we just like the idea of more simple living.”

That dream became a reality about a year ago when they moved to Chilton County.

A desire to simplify and “clean up” their lives began in earnest about three years ago when their oldest son Thomas started having stomach issues.

After medical tests could not reveal a root cause, the family made vast changes in what they ate to see if it would help.

“We hadn’t watched what we ate at all,” Jaime Elliott said. “We cut out dairy, which was hard, because we ate so much cheese. We cut out gluten, different sugars and his stomach healed itself.”

This made the couple decide it was really time to have the “little homestead” they had always dreamed of.

Purchasing goats was one of the first things they did to start their farm.

“He (Thomas) is actually able to drink the milk, it is different from the cow’s milk and it doesn’t upset his tummy,” Jaime Elliott said.

Because they wanted dairy goats, the Elliotts chose Nubian goats. Jaime Elliott said the size of their ears makes them stand out from other varieties.

“Their milk is very good,” Elliott said. “It’s creamy, and that really helps the taste.”

While the Elliotts cannot sell the raw milk, the family enjoys drinking it.

“We milk it into a sterilized stainless steel pot and try to … get it as cold as I can as quick as I can,” Elliott said.

She also double filters the milk.

In addition to making changes in their diet, the family also began using natural products as much as possible.

Jaime Elliott had already been buying goat’s milk soap before moving to Chilton County and was excited to try making it.

“Whenever we got our goats, the first thing I wanted to do was to make soap,” Elliott said. “I love it because I can control what’s in it, control what additives are in it, what colorings are in it.”

Finding the combinations she liked and finding out what worked well involved some trial and error.

“The goat’s milk adds a creaminess to the bar, rather than soaps that are just made with water,” Elliott said,

Much of the goats’ milk is frozen for making soap.

“I freeze as much as I can because they will stop milking them around August or September getting them ready to get pregnant again,” Elliott said.

The milk is mixed with lye, oil and fragrance to create a basic bar.

Working with the lye was the most intimidating part of the soap making process for Elliott. The substance can be dangerous, and safety precautions must be taken when using it.

The variety of materials that can be used allows for much creativity in the process. Several oils, such as olive, coconut, palm and grapeseed oil, can be used to make each bar unique.

“The options are endless, and that’s what I like about making soap,” Elliott said. “I like to us castor oil sometimes because it really gets good bubbles.”

An assortment of molds allows Elliott to create soap in fun shapes, including everything from a smiley face to an elephant.

When Elliott wants to make a number of the same kind of bars, she makes a long rectangle, which can then be cut into individual bars. Elliott said she makes each of the bars an inch thick.

Sometimes Elliott finds it hard to wait that long. While the soap can technically be used sooner than this, the longer the wait the softer the soap will be on the skin, she said.

“The method I’m doing is cold process soap making,” Elliott said. “It is made in small batches.” 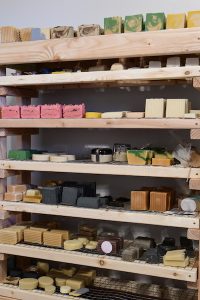 She likes unscented soap, but also enjoys soap made with oatmeal or lemongrass essential oil.

Oatmeal and orange peel powder add texture to the soap. Elliott plans on testing walnut shells as a natural exfoliate.

Activated charcoal also adds a unique element to some of her soaps.

“I love how the charcoal pulls the impurities out of your skin,” Elliott said.

Clay and oxides are also a common ingredient in many of the soaps to add color. Elliott has also used tumeric, spinach powder and cocoa for coloring the soap.

Scents in Elliott’s collection range from rose to coffee.

“I have made them in the little molds before with no problem,” Elliott said.

However, when she tried to make a long rectangle piece to be cut down later, the process did not go as smoothly.

“I had read that the salt hardens fast, that it is hard to cut,” Elliott said.

When she went to cut the individual bars after leaving it to set overnight, the soap had already become too hard to easily cut through, making portions of it crumble.

The soap is still useable, just not as pretty.

As Elliott found more combinations that worked and expanded her successful colors and scents, she began selling the soap as Triple E Farm on Etsy and in Rustique Relics. The name was chosen because the three Elliott children. Jaime and Stan have three sons: Thomas, Jackson and James.

It has also become a way for her to relax at the end of the day.