Everyone knows Santa Claus, the big man with a jolly laugh, red suit and white beard that brings toys to good kids every Christmas.

Santa lives in movies, books and mail order catalogs, but would he also live in the hearts of children around the United States if he wasn’t visible every holiday season riding in the local parade and posing for pictures at the mall?

Men like Clanton’s James Lowman keep Santa’s role in Christmas prominent—and enjoy doing it. Lowman portrays Santa Claus in Clanton’s Christmas parade and at other functions in the area, but his job is not an easy one. 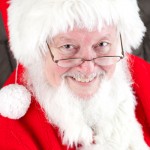 Children never cease to amaze adults with their intelligence, and many kids give much thought to the legend of the man that somehow slides down their chimneys and leaves presents every Christmas—and does the same thing for kids all around the world.

So, when they see Santa, there are questions that need answers. “They’ll ask me where I parked my sled, where are the reindeer? Well, I parked the sled somewhere out of sight so the reindeer won’t get spooked. I only need a small one this time of year, and only a couple of deer to get around,” Lowman said. “Where’s Mrs. Claus? Well, she’s back at the North Pole, of course, taking care of everything while I’m away. You have to be on your toes with some of these kids because they’re very smart.”

The most difficult responses, though, are those that attempt to dissuade a child from wanting a Christmas gift that mom and dad might not approve of. “The parents are close by, listening, and the child wants some kind of animal,” Lowman said. “I’ll say, ‘It’s an awful lot of work, you know.’ One little girl wanted a pony, and I asked where she was going to keep it—does your family have a barn? She said, ‘In my room.’”

Lowman enjoys his job because of the joy he brings to the children and their parents. “The best part may be watching the parents, seeing their faces, knowing they’re thinking about when they were kids,” he said.

Portraying Santa Claus also allows Lowman to tell children about the true meaning of Christmas: “sharing and giving.” “I’ll watch the parents to see how they respond, whether I can bring up Christianity. That’s an experience you have to learn how to handle. I think it’s just trying to get the traditional Christmas spirit back, trying to get it back out of commercialism.”

Lowman was working for AmSouth Bank in 2000, and the business had moved its offices to Galleria towers. Lowman had white hair, including a beard, and found himself portraying Santa at the mall. “It has bloomed from there,” Lowman said. He has since dressed the part for the Chilton Civic Chorale, the Chilton County High School Student Government Association and the Clanton Christmas Parade and tree lighting, among other gigs.

As would be expected, Lowman’s love for Santa grew from childhood experiences. He was born in Greenville but moved to Opp, where he attended the Christmas parade every year and went to see Santa in a local store. “By golly, I usually got what I asked for,” he said.

Lowman is a member of the Amalgamated Order of Real Bearded Santas, an organization dedicated to keeping the joy of Santa alive and pure. For example, even when not portraying Santa, Lowman dresses as the jolly old fat man would were he enjoying some down time. “I’ll try to really portray the part,” Lowman said. “Kids will see me somewhere, and their eyes light up and their mouths open. ‘Is it really him?’ I’ll just smile and wink—you never know.”