Houses are expensive and can take a while to build, and certainly no shortcuts were taken with Tom and Renee Powers’ new Greek revival style home.

But by utilizing uncommon materials and doing much of the work themselves, the Powers were able to build a home that is ideal for them and unique to the community. 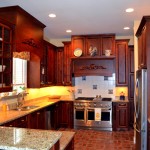 The project lasted about 10 years, as the couple lived above a workshop on their property. Finally, they are enjoying the fruits of their labor.

“It just shows that if you keep after something, you can make it happen,” Renee Powers said.

The Powers, who formerly lived near Chilton Medical Center, knew what kind of home in which they wanted to spend their retirement years. Mrs. Powers had an interest in Greek revival architecture—which would have been common in the time period around 1850—and spent 18 months studying the style.

She relied heavily on The American Builders Companion, which was written in 1827, and Creating a New Old House. Most homes in the South built in the Greek revival style were destroyed during the Civil War, but Powers was able to find some case studies in Eutaw and Natchez, Miss. She visited the homes and took lots of notes. “What we were trying to do is create a new home that looked old,” Powers said. 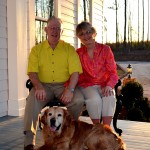 The Greek revival period, which could also be called neoclassicism, represents the revived interest in ideals that influenced European and American society during the 18th and 19th centuries through several venues such as thought, politics, fine art and architecture. Many of the most recognizable structures in the United States were built in this style—constructed after but hearkening back to classical Greek society.

The style is marked by an emphasis on the wall, as individual rooms and the entire structure is planar and symmetrical. Another obvious feature is the use of columns on the front.

At first glance of the house, one realizes it is not a structure typical to Chilton County. The most striking feature upon entering the home is the foyer area.

The dining room off to the right of the foyer is the first example of the unconventional approach the couple took to building their home. Powers had read such dining rooms typically featured a botanical mural. The couple eventually decided that a painting of a peach tree would be appropriate for the area while also in keeping with the style they wanted. Local artists Carolyn Cumbie and Peggy Smith were enlisted for the painting.

The wood floors in the home are reclaimed hardwood pine out of a mill in South Carolina. The cabinets in the study were designed by Tom and crafted by local woodworker Bobby Lane, and the beadboard in the room was taken from an old office in downtown Clanton. The mantle above a fireplace on one of the back decks is a slab of wood taken from a cedar tree in the front yard of Tom Powers’ old homeplace in Clanton.

Renee Powers credits her approach to the home building process to her days spent as a kindergarten teacher, when she had to find creative uses for items that could be used as instructional tools and make a small amount of supplies go a long way. It helped that Tom and Russ, one of the couple’s sons, possessed most of the skills necessary for construction.

“We utilized a lot of materials that people would never even look for, and we did a lot of the work ourselves,” Tom Powers said. “We wanted to build a home that would stand the test of time.”

Russ, who is a building contractor, was short on work because of the economic recession and was hired by his parents for a year to work on their home. He told his mother: “Mom, I know you and dad are paying me for my work, but I’m having the time of my life working with dad.”

Russ’ twin brother, Sam, also gets credit for the home. He helped Tom build the workshop, which would lead to the construction of the home on the same property.

Despite some unexpected circumstances—Tom served as the county’s tax assessor, and Renee was asked to help with the state level campaigns of two politicians—the home was eventually completed. The Powers are thrilled with it, of course, but Renee said she also thinks the house belongs to family and the community.

“God has richly blessed us with this so that we can share it with family and friends,” she said.