STORY AND PHOTOS BY JOYANNA LOVE

Artists often say the finished look of their creative project remains a mystery until it is complete.

This is especially true for those who enjoy fluid art, such as Amanda Ledbetter of Verbena. She said this artform uses acrylics, and there are several ways to swirl, swipe and mix the paint to get different textures and patterns. Ledbetter started doing fluid art in May 2022. She first saw the artform in a video on Facebook, where she found a group for fluid art creatives. “I started with Dutch pours,” Led-better said. In order to get the paint to free flow the colors are mixed with school glue and water before being poured over a canvas. Colors are poured on to a canvas that has been painted with a thick coat of primer. This base coat will be the background color for the piece. Once all of the colors are poured, Ledbetter uses a hair dryer to blow the colors away from the center. Ledbetter said blowing through a straw could also move the paint, but she prefers the hair dryer. “When it comes to the background colors, if you want them (other col-ors) to pop you generally go with a darker back-ground, but if you want them to look still vibrant but more subtle you go with a lighter one,” Led-better said. This base coat is called a pillow because the other colors will lay on top of it. Blooms are another type of fluid art. Ledbet-ter said the difference is that the paint is poured “in puddles in the middle of the canvas.” In this form, blowing with a straw works better, she said.

“You generally do it on a spinner,” Ledbetter said.

Once the paint has been blown out a little, the canvas is spun to further push paint away from the center to create a unique design. Led-better uses an old cake decorating turning stand as her spinner. When doing a swipe style fluid art painting, “it is the same principle as a Dutch pour, but … usually you put it across an edge. You layer your colors, and then you have a cell activator, which is usually white or black,” Ledbetter said. A straight edge, such as a playing card is placed on top of the cell activator and swiped to make the pattern. The cell activator creates a lace effect, where the base color underneath shows through. This process gives the paint a stretched out look and creates different thicknesses. 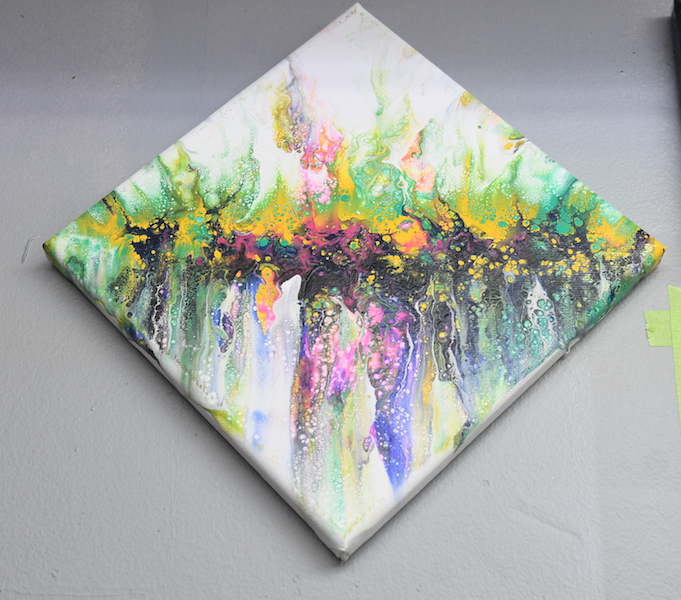 “Different colors will sink and some will rise” in the layers, Ledbetter said. “You just want to make sure that you layer it right so that they all come together perfectly.” The swipe can be manipulated for different patterns. Ledbetter sets her canvases on cookie cooling racks to dry. As her experience with flu-id art grew, Ledbetter’s began experimenting with the art form on things other than canvas.

“It got to the point where I had so many canvases that my closet was full, and no more would fit on the walls,” Ledbetter said. “I moved to coasters and keychains, different little things, then
one day someone asked me if I could do a tumbler. So, I started doing tumblers.”

She has also used ceramic as a base to able to peel off part of the top layer to create jewelry designs.

“It is fun to just try different things,” Ledbetter said.

As one can imagine, fluid art gets messy. Ledbetter has plastic up near her spinner, and the floor and lower walls of her shed art studio have paint splatters on them.

“It’s very relaxing cause there is no such thing as a perfect fluid art,” Ledbetter said. “It is just what do you want it to be.”

Although fluid art is relatively new for Ledbetter, she has enjoyed art since she was a child.
She said she started sketching at 11 years old, and she sold her first piece a year later.
“It was a black and white sketch,” Ledbetter said.

Over the years, she has enjoyed creating art with colored pencils, pastel, felt tip markers and paint. “I have done a little bit of everything,” she said. Being an artist is a side job for Ledbetter, “I work with my husband at his mechanic shop during the day, so mechanic by day, painter by night,” she said. At one point, she considered art school and took a mail-in test to see if she would do well in it. “I did that when I was 13 or 14, and passed it with flying colors, so I could have,” Ledbetter said. “But, I ended up going into the military instead.” She served in the U.S. Army Reserves from 2008 to 2014. “We did drill once a month, and then it was two months out of the summer,” Ledbetter said. “… I followed in my parents’ footsteps, they were the Army ones (in a family with many veterans).” Her unit was not deployed during that time, and she decided not to re-enlist because she had young children at the time. Ledbetter will be sharing her enjoyment of fluid art with the community by offering classes. Two courses will be offered on a monthly basis in 2023: one for teenagers and adults and the other for children ages 8 to 12. Classes will meet each Saturday with the $80 cost of one course covering the four classes that month. Each class will be one hour long.
To register for a class, contact Ledbetter at 205-299-4948.