Local favorite Main Street Café in Clanton has been serving up homemade Southern classics for the past 17 years.

The restaurant was born in October 2004 when Nickki Gore Powell and her father Larry Gore purchased an existing restaurant in downtown Clanton and changed the name.

This original location was next to Corner Park.

“I actually always loved cooking,” Powell said. “I grew up with grandparents that loved to cook.”

She said they were “excellent cooks” that showed her the secrets to Southern dishes.

Powell further prepared for running her own restaurant through training from the owner that was selling.

“I was very fortunate that she took the time to teach me everything,” Powell said.

“She was a very successful business woman,” Powell said. “… She was an excellent cook … the customers were there. It was just a matter of me learning and picking up when she left and retired, just picking up and doing the same thing that she did.”

Ten years later the restaurant was moved to its current location. This larger location expanded the opportunities for the restaurant with a larger seating area, upstairs room for catered events and a much bigger kitchen.

More than 130 people can dine at Main Street, compared to 88 at the original location.

“It also allowed me to start doing catering,” Powell said.

Her father was a major part of the renovation before the new location opened.

Powell said he was her business partner, “but he didn’t love it like I did.” He eventually went back to his first career.

“Pretty much everything here he has redone and touched, so it’s like having him here with me even though he is passed away,” she said.

Powell is still very hands-on with the business. She can usually be found with the kitchen crew cooking up the classics that have kept customers coming back.

“I hear over and over again people enjoy that things here are homemade,” Powell said. “They are from scratch.”

“I hear over and over again, ‘I haven’t had food like this since my grandmother was alive,’” Powell said.

Southern comfort food requires a good eye for estimation and a lot of taste testing.

“There is not a lot of measuring,” Powell said.

Breakfast regulars come when the doors open at 5:30 a.m. or before.

“A lot of these people have been eating here since I was across the street, and a lot of these customers eat here twice a day,” Powell said.

She said consistency is one of the keys to the popularity of their breakfast menu. Some customers order the same thing every morning, and their usual order is on the grill even before they sit down. 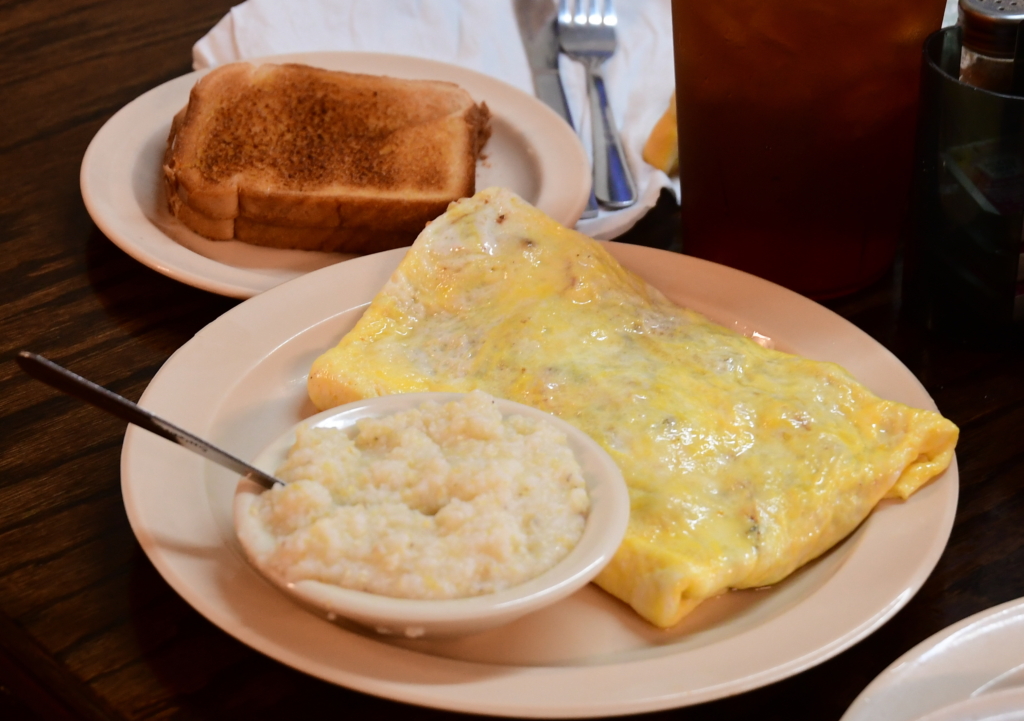 With the emphasis on everything being done from scratch, fresh eggs are used as opposed to the kind that comes in a carton.

Powell said she has been blessed to have several staff members who have worked with her since she opened. The majority of the employees have been there for at least 10 years.

A typical work day for Powell starts a 7 a.m. helping with breakfast and preparing for lunch, “Then I am in the kitchen until we close,” she said.

When the restaurant closes for the day, Powell handles the administrative side of the business.

Community members have made their enjoyment of Main Street’s food known loud and clear by voting to ensure it was the winner of three categories in Peach Living’s Best of the Best contest this year.

These included best breakfast, best lunch and best hot hamburger. In a town where hot hamburgers are a local specialty, Powell thinks hers stands out because of the homemade gravy and making the hamburger patty by hand from ground chuck.

Main Street’s hot hamburger stays classic with gravy and onions and the option of adding cheese.

“I have just been so blessed,” Powell said.

She said over the years customers and staff have become like family.

Powell said she was thankful for her team that makes the restaurant possible.

The restaurant has faced the challenges everyone has in recent years with the COVID-19 pandemic and now higher prices on supplies, but it has remained a destination eatery for many locals.

“It’s a tough business to be in,” Powell said. “If it wasn’t for the Lord and my family and the people that work here with me, I wouldn’t be (in business still).”

Main Street Café, 613 Second Ave. N, is open for breakfast and lunch Sunday through Friday. Each day has its own specials on the menu.