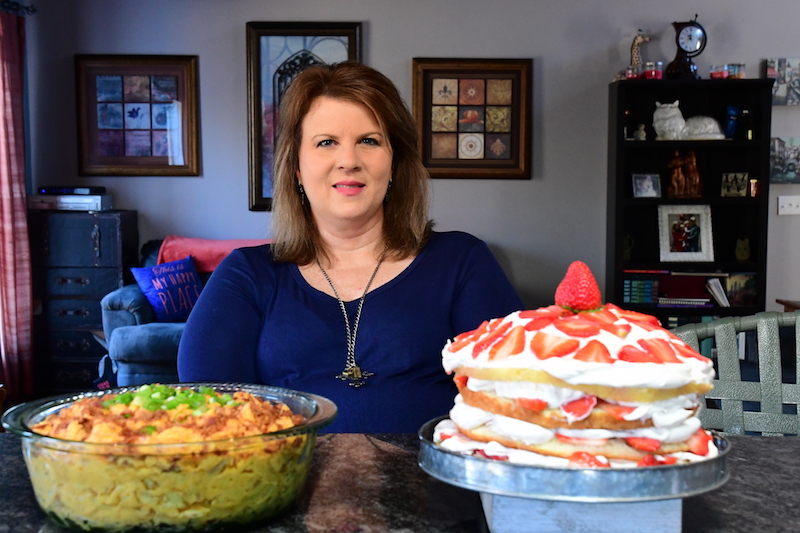 Story and Photos by JOYANNA LOVE

Savory and sweet come together in celebration for many dinners on Easter Sunday. Local cook Wendy Wright shares two of her delicious recipes that are sure to become favorites.

“I had no interest in cooking at all when I was growing up,” Wendy Wright said.

Although she had watched her grandmothers cook, Wright did not develop an interest for it at a young age.

She said her step-grandmother was “a really good cook,” as is her father.

When she was about 19 years old, she became interested in weddings and catering for them. This interest grew while she was working at a grocery store preparing fruit trays for events.

“When I first started cooking, I mainly just liked to bake,” Wright said.

Her culinary exploits continued to broaden to the point that she had her husband Dan opened a catering business and then a restaurant for a while.

“I taught myself a lot,” Wright said.

“A lot of people get intimidated because they think it (cooking) is complicated, and it’s really not,” Wright said.

Since baking is where Wright’s cooking interest began, let’s start with dessert.

The local strawberry crop is eagerly anticipated giving those with a sweet tooth and bakers alike delicious things to dream about for family get togethers.

Wendy Wright is one such person, and her strawberry shortcake is a great way to show some local pride.

Wright said she was looking for a simple way to make this classic cake.

“I love strawberry shortcake,” Wright said. “I didn’t have a family recipe or anything and I wanted one of my own.”

Her recipe uses a box of cake mix, strawberries, Cool Whip and sugar.

“Then, I found the French vanilla cake mix, and it makes a really big difference in the taste versus just the white of the yellow,” Wright said.

She said it is not necessary to boil the syrup to make the cake delicious.

Instead, Wright said she simply uses warm water and sugar.

As a child, she had only ever had store bought strawberry shortcake.

“I’m not a fan of those anymore,” Wright said.

When choosing strawberries, remember the darker red the fruit, is the sweeter it will be.

Wright said she cuts the green tops off her strawberries and rinses them in a colander.

“Some people will cut them up and then rinse them, I like to leave them whole and rinse them,” Wright said.

“Then, let it sit at room temperature for about 20 minutes,” Wright said.

She said a pint of strawberries usually equals one cup.

The cake mix is prepared, according to the box directions, in a round cake pan and then cut into four layers. Wright said a bread knife works best for cutting horizontally through the cake.

Wright places the first layer of cake on a cake plate, then drizzles her syrup mixture on the cake before placing a layer of sliced strawberries and whipped topping.

“The thing that makes it really good is to take some of the syrup and soak that onto the cake layer before the strawberries, so that it is nice and saturated because that is where most of the strawberry flavor comes from,” Wright said.

Elements of mashed potatoes, potato salad and loaded baked potatoes come together for Wright’s loaded smashed potatoes. The recipe is one she developed overtime.

The base came when she started leaving the skin on potatoes when making potato salad.

“There for a time I wouldn’t eat the skin on potatoes at all,” Wright said. “After cooking for a while, you start looking for shortcuts, so I started doing that with my potatoes.”

The final element of the recipe came when Dan perfected his “Wright Rub” seasoning and it was added to the mix.

Wendy Wright uses a spoon to smash the potatoes rather than a potato masher that way there are still some small chunks of soft potato throughout the dish.

Wright said she cuts the potatoes into about an inch square pieces before boiling them. After draining the potatoes, she adds cheese, salt, butter, sour cream and Wright Rub seasoning.

“I cover it up and let it sit for a few minutes,” Wright said.

The dish is then topped with green onions and bacon bits.

She said the dish goes well with ham at Easter or any meat.

“It’s pretty much something that everyone likes,” Wright said.