The hunting club carries a masculine connotation, manly men stalking animals or relaxing in a rustic lodge. Clanton woman Robin Brown might seem out of place—until you see her dragging her own deer out of the woods.

Brown is the only female member of a hunting club in Verbena, but she’s no newcomer. Brown, 48, has been hunting birds since her pre-teen years and hunting deer since her 20s.

“I’ve always loved the outdoors, loved to hike, and I’ve always loved shooting guns, so the hunting kind of makes sense,” Brown said. “I had an older brother who liked deer hunting, and he kind of got me into it.”

She’s a passionate angler, also, but this time of the year belongs to deer.

Brown has killed many of them, the largest being a 9-point with a 19 1/2-inch spread that weighed 160 pounds. The weight may be obvious, but for laypeople, the size of a deer is usually judged by how many antler points it has because bigger, larger bucks will have grown larger antlers. The “spread” is the distance between the two closest points.

Brown killed this trophy in January 2009 in a location she had scouted the day before and noticed a “rub” that indicated a big buck was in the area. A rub is when a buck scratches small trees with his antlers, warning other bucks of his presence and also providing a calling card to does.

Brown offers two pieces of advice: don’t be in a hurry to shoot a smaller buck and ruin your chance of seeing a larger buck later in the day, and be sure to not turn deer off with your smell. Brown takes special precaution that deer can’t smell her. “You can do everything else in the book right, and if the scent’s not right, they’re not going to come around you,” she said.

Even with all her apparent knowledge, Brown said there were some skeptical hunting club members when she was invited to join in 1998. “That kind of made it more of a challenge to me because I know they think that way. They don’t anymore.” 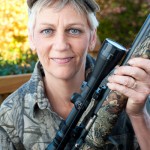 Brown’s living room walls are covered with mounted deer, but Brown said her passion goes beyond simply shooting deer. “I enjoy watching the deer more than I do shooting them,” she said. “You fall in love with that animal, and it’s not just all about killing it.”